To The Moon Wiki
Register
Don't have an account?
Sign In
Advertisement
in: Characters, NPCs, Males,
and 4 more

Throughout the majority of his life, Colin had short, neatly combed black hair, blue eyes, and fair skin. He was almost always seen wearing a blue shirt and checkered vest, as well as khakis. In his elderly years, Colin's hair is gray, his skin slightly wrinkled, and has begun wearing glasses.

During his early years, Colin was a shy, clumsy, anxious, and rather lonely child. He was rather awkward in conversations, and as a result, had little to no friends at all. His loneliness led to him "creating" Faye as an imaginary friend.

As a teenager, while still rather shy, Colin's confidence and willpower had improved thanks to the help of Faye. Regardless, he still had little to no friends, but claimed that this didn't bother him, as he was fine with Faye being his only friend.

As a young man, Colin's confidence had improved significantly, again, thanks to Faye's guidance. This newfound confidence led to him earning a full-time job as a pilot, as well as the courage to begin dating and eventually marry Sofia, a girl he met in his orchestra class. It was around this time that Colin and Faye drifted apart, much to Colin's sadness.

As an elderly man, Colin had matured and developed a rather stoic personality, while still being incredibly loving towards his wife and son. Burdened by several major regrets in his life, Colin eventually employed the help of Sigmund Corp to help fulfill his final wish, which was ultimately to speak to Faye one last time, and thank her.

Faye was Colin's first real friend as he mentioned in the game, even though he already had an actual real friend before, which was his friend bird. The two met each other as children and hung out almost everyday, and would speak to each other on their balconies every night. The friendship remained strong throughout their teenage years and into their early adulthood, until Faye deemed that Colin no longer needed her and would have to focus on his life. The two drifted apart, with Colin not seeing Faye again until the final minutes of his life. It was later revealed that, technically, Colin "created" Faye using his mind to cope with his lonely years without friends. One of Colin's major regrets in life was not being able to see Faye again, leading to him hiring Sigmund Corp to help give his life a fulfilling end. Ultimately, Colin got to speak to Faye for one last time, in which he thanked her for being his friend when nobody else would, and lamenting the fact that there was no time to tell her about his life since her absence.

Based on their interactions, it was clear that Colin and Faye both cared deeply for each other. With Faye's guidance and friendship, Colin was able to achieve several major milestones in his early life, such as getting a job as a pilot and asking Sofia out on a date.

Sofia and Colin met each other as young adults, as they were both in the same orchestra class. Colin eventually mustered the courage the ask Sofia out on a date, which she accepted. The two were seen going to an aquarium together, as well as Colin taking Sofia for a flight on his personal plane. The two continued dating until Colin eventually proposed to her, which Sofia happily accepted. The two honeymooned at Bora Bora, where Sofia taught Colin to write in invisible ink using lemon juice. The newly-weds would go on to have a son, Asher, and continued to live as a happy family for years. In their later years, Sofia and Colin had a brief fight over Colin's decision to hire Sigmund Corp to alter his memories. When promised by Colin that he wouldn't change anything involving her or Asher, Sofia eventually relented. During Colin's final moments, Sofia was by his side and kissed him as he passed. At the same time, Colin's last thought was of Sofia sleeping on their bed.

Asher is Colin's son and only child. As seen during the flashback sequence, Colin loved Asher dearly, and gave the boy a fun and love-filled childhood. In Asher's later years as an adult, Colin was slightly disappointed that Asher had yet to find a wife and have children. Regardless, Colin continued to love Asher unconditionally.

Past Echoes trading card from Steam 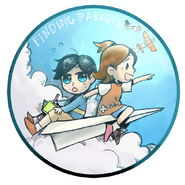 Acrylic stand of Colin from the official merch store