To The Moon Wiki
Register
Don't have an account?
Sign In
Advertisement
in: Characters, NPCs, Females,
and 2 more

View source
watch 01:36
We're Getting Mutants in the MCU - The Loop
Do you like this video?
Play Sound

Medium
Young River (to Johnny)
"Because one day. . .
I'm going to befriend one of them."

River E. Wyles is a main character in To the Moon. She is Johnny's wife who passed away prior to the events of the game. The game describes her as having a pervasive developmental disorder, heavily implied to be a form of autism formerly known as Asperger's syndrome.

River's personal life is unknown due to her story in To the Moon being told from Johnny's perspective. Thus, the following sections only describe her history with Johnny.

River first met Johnny in the woods outside a local carnival when they were children. The two stargazed and created a rabbit constellation using the moon as the rabbit's belly. River told Johnny that she'd always thought the stars were lonely lighthouses that were too far apart to communicate, and all they could do was merely shine their lights towards one another. When they heard Johnny's mother looking for him, the two agreed to meet again there the next year, and declared that they would reunite on the moon if they ever lost each other. Before leaving, Johnny gave River a stuffed platypus toy, something she would go on to form a great attachment to, as well as a hacky sack.

Unfortunately, Johnny later forgot his meeting with River after being prescribed a form of beta-blockers that effectively wiped out many of his memories from his early childhood. The two wouldn't see each other again until their adolescent years.

Years later, the two happened to go to the same high school. River had difficulties expressing herself and communicating with the majority of people, and she was regarded as odd and an outcast by most of her fellow students (later in life, she would be diagnosed with Asperger syndrome). Johnny, however, thought that her weirdness was attractive. With his best friend Nicholas' support, Johnny asked River out on a date and they began a relationship together.

The two eventually went on to become married as they grew up. Their wedding took place near a lighthouse. Since lighthouses held an immense sentimental value for River, she quickly became attached to it. She named the lighthouse "Anya", and they continued to visit the place long after they were married.

One night on the cliff overlooking the lighthouse, Johnny confessed to River that the reason he'd asked her out at high school was merely because he'd wanted someone who stood out from the others. River didn't react until Johnny referred to it as their first meeting. Surprised, she handed him the hacky sack he'd given her in their true first meeting at the carnival, and asked him if he would throw it "as far as Anya's at". She was shocked as Johnny heeded her request and threw it away like it was nothing, and at that moment she truly realized that Johnny didn't remember their first meeting at all.

To attempt to remind Johnny of their childhood, River folded copious amounts of paper rabbits, which were supposed to represent the rabbit constellation they'd made together when they stargazed on that cliff. She also cut her hair the way she'd worn it back then. However, it failed to elicit any remembrance out of Johnny. She continued to fold the origami rabbits day in and day out every single day the rest of her life, although it would be in vain.

Time passed, and late into their adulthood, Johnny told River that they would be able to save up enough to build a house near the lighthouse. River was thrilled to be able to watch over Anya every single day. During its construction, however, River would be diagnosed with a late stage terminal illness. Due to their financial limitations, Johnny became conflicted over whether he should finish building the house or redirect the money to River's treatment instead.

Johnny lied to her that they will have just enough money for both, but River knew they won't. She refused the medication and wishes that Johnny would spend the money on the construction. She then gave Johnny a different paper rabbit than she usually folds: it was colored blue for the head and legs while the torso was yellow, resembling the constellation they'd made when they first met. But unfortunately for her, Johnny was unable to remember, and even after her death, he would never understand why she'd gone to lengths folding those rabbits.

She was buried in front of the lighthouse. Johnny would then complete the house's construction, as she'd wished, and live there alone, until he eventually hired Lily as his caretaker. When he dies at the end of To the Moon, he is buried right next to his wife.

River is a fair-skinned woman with vibrant orange hair and green eyes. She often wears blue and white clothing, though she is sometimes seen wearing purple and white. Her hair was short as a child, but she wore it long throughout her teenage years and adulthood. As she approached old age, she cut her hair short again when she had to remind Johnny about their first meeting.

River is autistic[1], thus she has significant difficulty conversing with others in a way that conforms to neurotypical norms, pausing frequently before she speaks and answering questions either very briefly or very lengthily. She also tends to interpret language in a literal way. This is evident when Johnny asked her to catch a movie together - according to her, being in the same room watching the same movie counts as watching it “together”. She also has trouble expressing her emotions in a way that neurotypical people would easily understand. Her paper rabbits are a prime example of that, as well as her lighthouse metaphor of isolation which she elaborated to Johnny when they stargazed outside the carnival. She is also exceptionally skilled at remembering the contents of books. One example is in her classroom, when the teacher asked a history question - she answered verbosely and the teacher had to stop her.

She also has intense, specific interests. Ever since she acquired the platypus toy from Johnny, never once is she seen without it. Her sentimental fascination towards lighthouses also persists throughout her life, and she even went as far as refusing treatment when she was terminally ill so Johnny could finish building a house next to one.

Johnny is River's husband. The two first met as kids, wanting to escape the noise and crowds of a local carnival. Together, the two stargazed and created a rabbit constellation. Before leaving, Johnny gifted River a stuffed toy platypus, an item she would cherish for the rest of her life. The two agreed to meet up next year at the carnival, but due to beta-blockers, Johnny forgot their meeting entirely. River, however, did not forget and hoped every year for Johnny to return, but he never showed up.

By chance, the two met again as they happened to attend the same class in middle school. Despite not remembering her, Johnny became attracted to her. He attributed his interest in her to his desire to be unique, but seems to subconsciously remember her, evident in his conversation with Nicolas at the school cafeteria. He asked River out on a movie date, which she accepted, and they became lovers. Throughout their relationship, Johnny avoided trying to understand her personality (implied in his refusal to read the Tony Attwood book) but still sought it as a way for him to be different, which is can be interpreted as selfish on his part. Regardless, River continued to love him, and the two remained close until adulthood, in which they got married.

When River realized Johnny had amnesia, she made subtle attempts to jog Johnny's memory and make him remember their first meeting. One way she would do this was by crafting countless paper rabbits, referencing the constellation they created together as kids. Ultimately, Johnny would never end up remembering their first encounter, much to River's sadness.

In their older age, Johnny told River that they would be able to save up enough to build a house near the lighthouse. River was thrilled to be able to watch over Anya every single day. Unfortunately, at the same time, River was diagnosed with a late-stage terminal illness. The cost of building the house would mean River would be unable to receive treatment, but she insisted the house be built anyways. She would eventually pass away, with Johnny being devastated by her death. Her death ultimately triggered a subconscious desire deep in Johnny's brain to go to the moon, which was where they agreed they'd meet if they got lost from one another when they met the first time.

As revealed in the spin-off comic Paper Memories, River and Colin were actually classmates and were seated next to each other for some time. Though she is mostly silent towards Colin due to her autism, the two would form a brief friendship over their shared love of origami. Colin gifted River a book on origami so that she could continue to practice at home. Eventually, Colin noticed Johnny's attraction to River, so he changed his seat presumably so River and Johnny could be seated together. Some time later, while hanging out with Faye and telling her about it, a stray paper airplane struck Colin on his head. It's revealed after that River actually crafted the airplane and launched it from her window, having mastered origami thanks to Colin's book.

Anya by the Moon trading card on Steam

No Helmet trading card on Steam 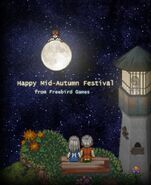 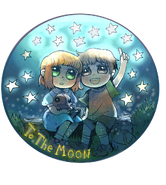 Acrylic stand of Johnny and River from the official merch store