To the Moon, too!

To the Moon, too!

To the Moon, too! is a short comic by Kan Gao and Sarah Ollerhead, featuring River's stuffed platypus, Plat-plat, and the blue and yellow paper rabbit River folded as they try to get to the moon to be with River and Johnny. The comic is available for download as Steam DLC, and a physical version can be purchased at Freebird Games' online store.

The comic opens on Plat-plat and the Paper Rabbit missing Johnny and River's launch to the moon. They then try to get there themselves in multiple ways, including mistakenly seeing a show, making a slingshot, getting in a kids' rocket ship ride, and dressing as superheroes. Eventually, they try to make a flying machine, which they ride off a cliff and into the sea, resulting in them getting stranded on an island where they have to learn to survive. The Paper Rabbit finds several geysers, and they use them to shoot themselves into the sky to try to reach the moon. It doesn't work, but a nearby fisherman sees them and rescues them from the island.

Once they get off the boat, they try shooting themselves out of a canon and tying balloons to themselves. The balloons seem to be working, but the Paper Rabbit falls and Plat-Plat has to look for it on the ground. Plat-Plat eventually sees the Paper Rabbit singing on a TV and goes to find it. When they reunite, the Paper Rabbit shows Plat-plat several other paper rabbits, that stack on top of each other so that the two can climb them to reach the moon.

When they get there, Johnny and River welcome them, saying they've come a long way and then hugging them. Before Plat-plat and the Paper Rabbit leave, River and Johnny tell them to visit anytime. At the end, it's revealed that Sarah had been playing with them the entire time when she's called for dinner. Plat-plat winks at the Paper Rabbit, and Sarah carries them back to the house. 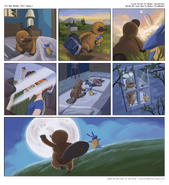